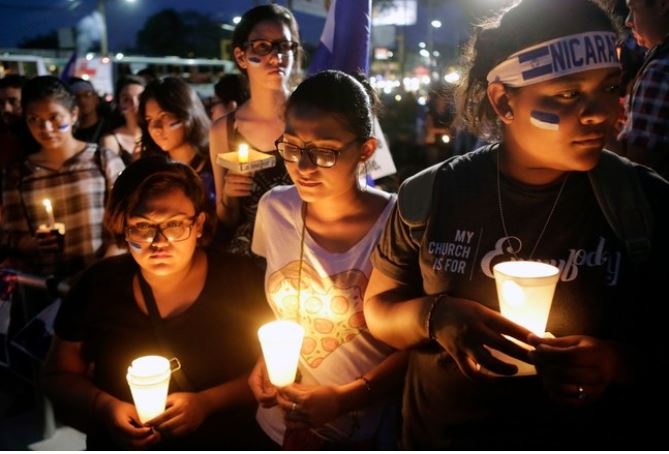 Nicaragua on the Brink, Once Again

Nearly forty years since a popular insurrection toppled Nicaragua’s right-wing dictator Anastasio Somoza Debayle, the Central American nation has once again been engulfed by political unrest, and appears to be on the brink of momentous change.

The present convulsion began earlier this month, after President Daniel Ortega proposed a change to the country’s social-security provisions that would have forced taxpayers to pay more for the program while simultaneously cutting payouts to beneficiaries. Nicaragua is one of the poorest countries of Latin America, and public reaction to this change was furious and swift, with demonstrators taking to the streets to protest. The government’s ensuing response was as ill-considered as it was cruel. Police around the country fired live ammunition to break up the protests; as many as sixty people are believed to have died in the chaos that followed, including Ángel Gahona, a young reporter who was shot in the head while conducting a Facebook Live report in the streets of the Caribbean coastal town of Bluefields.

As the civilian deaths mounted, Rosario Murillo—Ortega’s wife, Vice-President, and spokesperson—issued a stream of belittling comments, calling the protesters “bloodsuckers,” “criminals,” and “vampires.” This only raised the ire of many thousands of ordinary Nicaraguans, and, just as happened in the late nineteen-seventies, when the dictator Somoza tried to stamp out dissent with harsh measures, the sentiments on the street have only hardened.

By Sunday, Ortega backtracked on his social-security measure, but his unapologetic remarks on the matter were so casual as to seem offhand, and, in any case, the damage was done. In the street, people continued to chant “Ortega, Somoza, son la misma cosa” (“Ortega and Somoza are the same thing”), and not only have the protesters refused to disperse but many of them are now calling for Ortega to step down.

It’s clear now that, for all their pragmatic backpedalling on the social-security bill, Ortega and Murillo’s long time in power, and their near-total control of Nicaragua’s public institutions, have left them out of touch with the feelings of many of their countrymen. Ortega initially rose to power after the 1979 Sandinista revolution, when he was known as a Marxist firebrand, and he served as the country’s strongman President until 1990, when he ceded power after losing elections. He returned to the Presidency, in 2006, after dropping his Marxist tag, allying himself with former politicos and enemies that included Nicaragua’s corporate class and its archconservative Catholic archbishop, and declaring himself a belated follower of Jesus Christ. In the years since, Ortega and his wife have steadily consolidated their power, eliminating their opponents through a canny combination of economic co-option and, when necessary, outright repression.

In addition to the executive branch of government, Ortega and Murillo dominate Nicaragua’s Congress and judiciary. The couple’s children, in turn, run the family’s business empire via a web of public-relations firms and media companies that functions as the government’s communications department. The Ortega-Murillo regime, in other words, exists in an echo chamber.

There are many historical ironies to be found in Nicaragua’s crisis, not least the fact that, forty years ago, Ortega was a young revolutionary who convinced many Nicaraguans (and news consumers around the world) that he was part of a righteous campaign against Somoza, whose father and brother had previously ruled the country in a dynastic reign that stretched back to 1933. The group Ortega headed, called the Frente Sandinista de Liberación Nacional, or F.S.L.N., was a guerrilla army, inspired and supported by Fidel Castro’s regime in Cuba. Upon seizing power, the Sandinistas immediately aligned themselves with the Soviet Union and embarked on an effort to help bring other guerrillas to power in El Salvador, Guatemala, and other countries. While Ronald Reagan was President, Nicaragua became a front in the Cold War, which, eventually, thanks to the C.I.A.-backed Contra war against Ortega’s regime, led to the economic devastation of Nicaragua and the collapse of the Sandinistas’ hold on power.

Another irony is the fact that, just as it was at the end of the Somoza regime, the leading voices of dissent and custodians of press freedom in Nicaragua are the handful of media outlets owned by the Chamorro family. It was the January, 1978, assassination of Pedro Joaquín Chamorro Cardenal, the owner and editor of the country’s main newspaper, La Prensa, that sparked the anti-Somoza insurrection. Chamorro’s widow, Violeta, was a member of the original Sandinista group that took power after Somoza’s overthrow. But she joined the opposition to Ortega after he turned the government into a Marxist regime. And when he lost power, in 1990, it was Violeta who succeeded him.