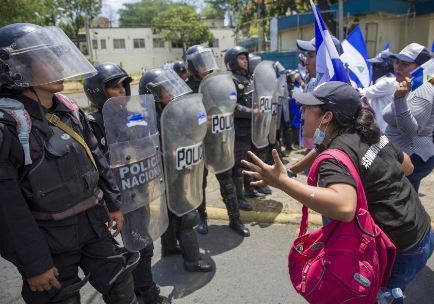 Some family members of the officials may also be affected.

“We will not publicly identify these individuals due to U.S. visa confidentiality laws, but we are sending a clear message that human rights abusers and those who undermine democracy are not welcome in the United States,” the statement added.

The visa restrictions came on the same day Sen. Marco Rubio, R-Fla., met with three prominent Nicaragua university student activists and the widow of a Nicaraguan journalist who was killed during protests.

“As I said 2 days ago,U.S. not going to stand by & allow human rights abusers & those undermining democracy in #Nicaragua to spend their weekends vacationing in Miami,” Rubio tweeted on Thursday after the visa restrictions were announced. “Today @StateDept @SecPompeo issued visa restrictions against some of them. More to come.”

The United States has become increasingly vocal toward the violence in Nicaragua, which has resulted in more than 110 deaths since the start of protests against social security cuts that turned into a movement against state violence and Nicaraguan President Daniel Ortega.

Rep. Ileana Ros-Lehtinen has been pushing for the NICA Act, which would use U.S. influence to oppose any loan from international financial institutions to Managua until the United States approves of Nicaragua’s democracy and human rights standards.

“I also called for our Senate colleagues to quit stalling and to take meaningful action to support the Nicaraguan people by passing the NICA Act so that we can keep the pressure on the Ortega regime until true democracy + freedom return to Nicaragua,” Ros-Lehtinen tweeted on Thursday.