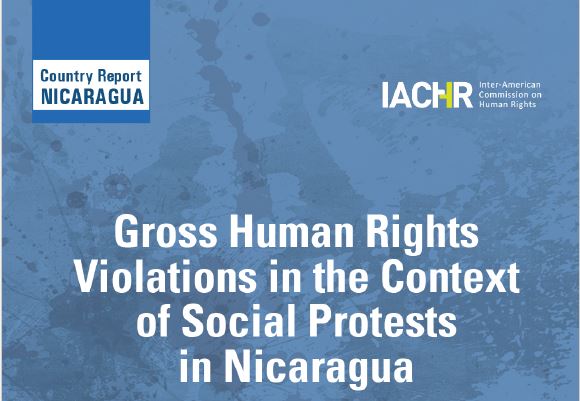 Washington, D.C. – The Inter-American Commission on Human Rights (IACHR) submitted today to the Permanent Council of the Organization of American States (OAS) its report “Serious human rights violations in the context of social protests in Nicaragua.”

The report addresses the human rights situation in Nicaragua as observed by the IACHR in a working visit to the country on May 17-21, 2018 and through the Commission’s monitoring of the events after that visit, in the context of violence that has surrounded the protests that broke out on April 18, 2018. According to figures collected by the IACHR, the State’s repressive actions had left at least 212 people dead by June 19, 1,337 people injured and 507 people deprived of their freedom by June 6, as well as hundreds of people at risk after being victims of attacks, harassment, threats and other forms of intimidation.

The findings of the working visit show that violence has focused on discouraging participation in demonstrations. It followed a common pattern, marked by the excessive and arbitrary use of the police force, which included the deliberate, systematic use of lethal force; the use of parapolice groups with the acquiescence and tolerance of State authorities; obstacles to hinder access to emergency medical assistance for the injured, as a form of retaliation for their involvement in demonstrations; a pattern of arbitrary and unlawful detentions of young people and adolescents who were peacefully taking part in protests and passers-by who were in the areas where incidents took place; the use of cruel, inhuman and degrading treatment against most of those who were detained, which in some cases crossed the torture threshold; the use propaganda and stigmatization campaigns, and of direct and indirect forms of censorship; intimidation and threats against social movement leaders; and lack of due diligence to launch investigations into the murders and injuries that happened in this context.

The Nicaraguan government’s repressive response to the protests has led to a serious human rights crisis. The Commission concludes that the State of Nicaragua has violated the rights to life, personal integrity, health, personal liberty, assembly, freedom of expression and access to justice. The Commission is particularly concerned about the murders, likely extrajudicial executions, mistreatment, likely acts of torture and arbitrary detentions perpetrated against the country’s mostly young population. Further, the IACHR expresses its concern over the violation of the right to health and over the denial of medical attention, the retaliation against public officials who refrain from fulfilling orders that violate human rights, the acts of censorship and harassment against human rights defenders and the irregularities in launching investigations into the murders and injuries perpetrated in that context, along with other serious events the Commission has verified. It is demonstrators—including students who sought refuge in university premises, people who held the so-called tranques (road blocks) in different parts of the country, human rights defenders, journalists, victims and church officials—who are worst affected by various forms of repression.

The IACHR warned that the State’s response also included spreading propaganda and stigmatization campaigns. Checking through various media outlets shows that such campaigns have targeted those who take part in protests or are active in the defense of human rights. In Nicaragua, human rights defenders, victims’ families and people who have witnessed human rights violations face serious risks.

The IACHR notes that there is increasing social violence in the country. Tensions and reactions to the atmosphere of unfairness and lack of protection by State actors are leading to actions beyond the scope of peaceful protest. Social sectors close to the government and State agents have also been subjected to retaliation and harassment. Based on data that were provided by the State, at least five police officers died and 65 were injured April 18-June 6, 2018, in the context of the protests. The Commission also condemns those actions. They too pose a threat to people’s life and integrity and need to be investigated and punished.

The IACHR insists on its call for an immediate end to repression. It further demands that all acts of State violence be immediately subjected to an autonomous and independent investigation, in strict compliance with the international standards and regulations on the issue to preserve the right to the truth. The State has an obligation to adopt any measures necessary to ensure adequate reparations for victims and their families, in keeping with the prevailing standards.

In a context of political crisis and social conflict like Nicaragua’s, it is essential to create the conditions necessary for an unrestricted exercise of the rights to freedom of expression, assembly and association. This implies making sure that any State response to demonstrations and expressions of dissent—including road blocks and occupations of university buildings—is carried out with a negotiated management approach that favors communication, cooperation and the exchange of information rather that increasing the use of police force and other coercive measures. The IACHR condemns the use of violent means by a group of demonstrators, but it also urges the State to take any measures necessary to guarantee that its own actions comply with international standards and regulations on this issue and always seek to reduce social conflict and facilitate meaningful dialogue. In that context, the IACHR calls for a continuation of negotiations within the National Dialogue, with the aim of finding a peaceful solution to this serious human rights crisis.

This report is a starting point for the work of the Interdisciplinary Group of Independent Experts (GIEI, by its Spanish acronym) and focuses on technically determining the main lines of investigation and on issuing recommendations for concrete actions that need to be taken at various levels of legal responsibility. This report also lays the groundwork for the creation of the MESENI, a mechanism created to monitor compliance with report recommendations and with precautionary measures granted in this context, which will enable the IACHR to keep following the human rights situation in Nicaragua.

The Commission thanks the State of Nicaragua for its invitation to visit the country, and it also thanks civil society for its support with relation to that visit. The IACHR values all the information provided by State authorities, as well as their logistic support.

The Commission would particularly like to thank hundreds of victims, witnesses, relatives, groups and organizations who made their statements and claims and provided detailed information on events in a complex context that called for great courage and a commitment to justice. In the memory of the 212 people killed, our report includes an appendix with each of their names.

Considering Nicaraguan society’s painful past and the historical commitment for such events not to happen again, the Inter-American Commission on Human Rights trusts that a peaceful, democratic and constitutional solution can be developed for the serious political and human rights crisis that is currently affecting the country. Any potential solution must integrate a commitment to the truth, guarantees for investigation and effective justice, and due reparations for all victims and their families. The IACHR stresses its full availability to keep supporting this process.

A principal, autonomous body of the Organization of American States (OAS), the IACHR derives its mandate from the OAS Charter and the American Convention on Human Rights. The Inter-American Commission has a mandate to promote respect for and to defend human rights in the region and acts as a consultative body to the OAS in this area. The Commission is composed of seven independent members who are elected in an individual capacity by the OAS General Assembly and who do not represent their countries of origin or residence.