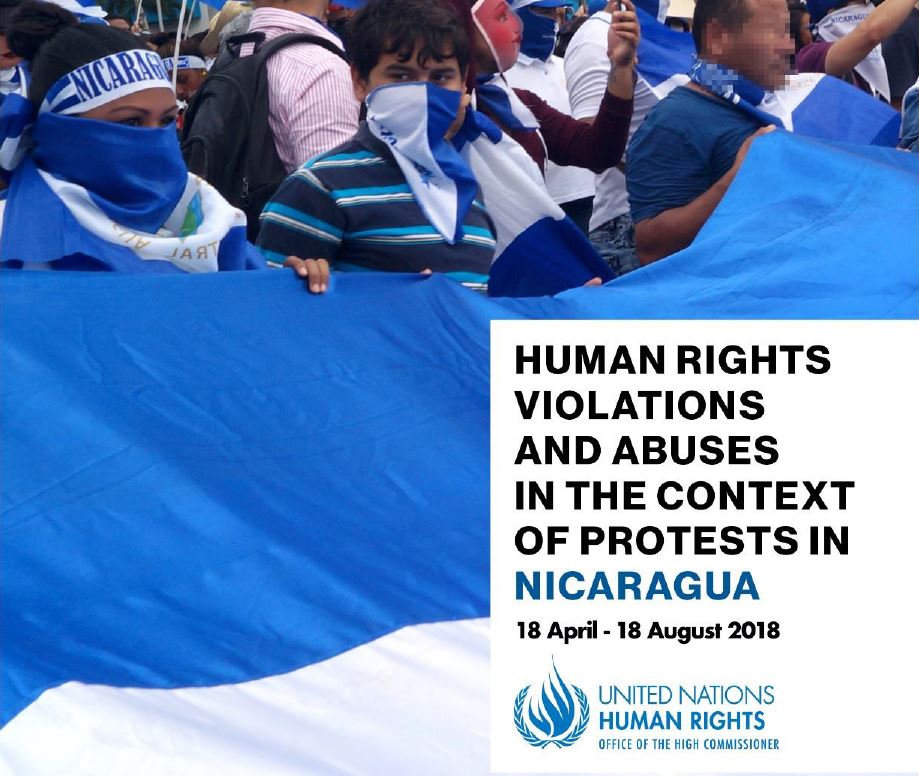 GENEVA (29 August 2018) – Urgent action is needed to address the human rights crisis in Nicaragua, where the level of persecution is such that many of those who participated in the protests that erupted in April, defended protesters’ rights or simply expressed dissenting views, have been forced to hide, have left Nicaragua or are trying to do so, a report* by the UN Human Rights Office said on Wednesday.

“Repression and retaliation against demonstrators continue in Nicaragua as the world looks away.  The violence and impunity of these past four months have exposed the fragility of the country’s institutions and the rule of law, and created a climate of fear and mistrust,” said UN High Commissioner for Human Rights Zeid Ra’ad Al Hussein.
“I urge the Human Rights Council, and the broader international community, to take concrete action to prevent the current crisis from descending into deeper social and political turmoil. Any such action should aim to ensure full accountability for human rights violations and abuses, enable victims to have effective access to justice and appropriate remedies, including reparations and the right to know the truth,” the High Commissioner said.

The report covers the period from 18 April, when protests against planned social security reforms began, to 18 August. Among the violations and abuses of international human rights law documented in the report are the disproportionate use of force by police, sometimes resulting in extrajudicial killings; enforced disappearances; widespread arbitrary detentions; torture and ill-treatment; and violations of the right to freedom of opinion and expression, and of peaceful assembly.

The report notes that the first phase of the crisis saw a repressive response to the protests by the police and pro-Government armed elements. During the second “clean-up” stage, from mid-June to mid-July, police, pro-Government armed elements, including those known as “shock forces” (fuerzas de choque), and mobs (turbas) forcibly dismantled roadblocks and barricades.

Information obtained by the UN Human Rights Office strongly indicates that these armed elements acted with the acquiescence of high-level State authorities and the National Police, often in a joint and coordinated manner. “Although the Government no longer denies the existence of pro-Government armed elements, it condones their actions and allows them to operate with impunity,” the report says.

During the crisis, some 300 people have reportedly been killed and 2,000 others injured, according to various sources. Most of this violence took place from mid-April to mid-July. Analysis of available information confirms that most of the victims were men under 30, which reflects the average profile of the protesters, who included university students and young professionals.

The report also notes that members of the Sandinista party, Government officials and members of the security forces (in particular the National Police) were attacked, and 22 police officers killed. “The level of brutality in some of these episodes, including burning, amputations and desecration of corpses illustrates the serious degeneration of the crisis,” the report says. These abuses need to be investigated and do not legitimize in any way a response by the State that is not in line with international human rights law.

After the suppression of protests, the third and current stage of the crisis has seen demonstrators and others regarded as Government opponents persecuted and criminalized. According to information available to the UN Human Rights Office, as of 18 August, at least 300 people were being prosecuted, including on charges of terrorism and organized crime, for having participated in or supported the protests. These trials have serious flaws and do not observe due process, including the impartiality of the courts, the report says.

Civil servants, including teachers and doctors, have been sacked, and people seen to be critical of the government have been harassed, intimidated and even attacked. The authorities, including at the highest-level, have increasingly stigmatized and discredited protesters and human rights defenders, describing them as “terrorists”, “coup-mongers” or “plagues”.

“Rather than recognizing responsibility for any wrongdoing during the crisis, the Government has placed the blame on social and opposition leaders for what they have termed ‘coup-related violence’ as well as for the negative impact of the political crisis on the country,” the report notes.

The report urges the Government to take urgent measures to guarantee the independence and impartiality of the judiciary and to resume the National Dialogue between Government officials and representatives from various sectors in a meaningful way to reach agreements based on human rights and democratic principles.

See also this video from the press conference. The video is only available on Spanish: https://www.youtube.com/watch?v=DEkQ2FvvOL0