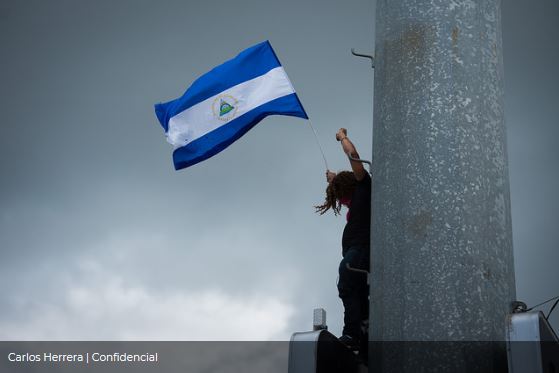 The Strategic Defeat of Ortega in Nicaragua

There is no excuse for not moving forward in unity. We are winning!

We are winning because there is no return to the past. Because the future began to take shape at the moment the population lost its fear and freedom seized the streets.  An out of control Orteguismo is already in the past – all that remains is his repressive apparatus.

The strategic defeat is measured from irreversible changes that signal an end to the dictatorship:

1- The unstoppable uprising of youth as a newly mobilized – and mobilizing – force that woke up the entire country. No regime can win out against an organized, courageous youth with high levels of energy and creativity. What happens is what happens under every dictatorship: those in power repress one group … and three more are born. It is an insurrection already sustained in time and linked to the peasant resistance. When they are not on the streets, they are organizing, in national and international caravans that cross neighborhoods, cities and borders– awakening consciousness across three continents. The presidential couple rants, seeking to kneecap the young people’s leadership.   Yet they will not be able to because the leadership is everywhere and at all levels.   We are winning!

2- The collapse of the corporate model. Ortega’s alliance with big capital has been buried for good. The regime itself recognizes this, authorizing the takeover of private lands, and throwing up barricades at Customs. At the same time, the understanding between a civil society in rebellion and big businessmen should not be limited to the current moment, but rather should be a way to visualize a new model of the State, with clear rules to play cleanly, and an end to legalized and nepotistic corruption. Everyone understands that economic “normalization” can only happen through establishing the rule of law, along with the full exercise of public rights and freedoms. We are winning!

3- The position of the Catholic Church side by side with the resistance. The Catholic Church today has the greatest moral and social authority in its history, recognized by evangelicals, atheists, agnostics, and even Nicaraguan LGBT and feminist activists. Every idiotic onslaught by the regime against the physical integrity of bishops and priests sparks more outrage and the regime’s true nature is exposed to the world, and even to the party faithful.  They cannot throw the bishops out of the national dialogue. The traditional culture and faith of the people is intertwined with rebellion and the desire for democracy — an indispensable combination to ensure victory. We are winning!

4- The separation of Central America from Orteguismo. Another pillar that collapses is the Central American one. Powerful commercial and financial interests are suffering losses and are aware that Ortega is unable to stabilize the country so that those losses can be recovered. There is a consciousness among civil society that, with the regime’s end, Nicaragua will no longer harbor criminals or traffickers pursued by law. At a regional level, the Central American Integration System (SICA) is working with the OAS to come up with an exit strategy for the dictator. We are winning!

5- The growing impatience of the United States government.  The US government as a whole is convinced that Ortega no longer offers either the necessary stability or security to guarantee US interests in the region. On the contrary, the dictatorship has become a factor contributing to both national and regional destabilization. Ortega’s excesses, widely reported in the media and denounced in Congress, end up convincing the Executive that Ortega must leave as soon as possible.  Nobody ignores the fact that the United States has at its disposal innumerable mechanisms of political and economic pressure. There is also pressure on the US and others not to play into exit strategies tailored to Ortega. We are winning!

6- The divorce between the international left and the Ortega regime. It could be said that the “ideological” battle was won as, although for reasons of state and self-interest, some governments on the left continue to support Ortega, although in increasingly less explicit ways. Many other leftist movements and key leaders – from Pepe Mujica to Subcomandante Marcos – are abandoning the dictatorship because autocracy and the politics of terror are simply indefensible. One hears the old phrase that FDR used to refer to Somoza García – “he’s an “S.O.B., but he’s our S.O.B.”; also used by the international left to refer to Daniel Ortega. Now, they omit the second part of the sentence and distance themselves. At the same time, leftist movements are recognizing the presence of non-Ortega Sandinistas in the streets and in positions of local leadership. Inside and outside the country, a distinction is made between Ortega and Sandinismo. Sandinistas and non-Sandinistas who protest in the streets are the embodiment of Sandino’s historic rebellion. We are winning!

7- The ongoing efforts of the opposition to negotiate a peaceful and democratic transition. Step by step, the political bloc of an authentic opposition is taking shape. It is demanded both by the people and by the international community. Driven and inspired by social mobilization, forces such as the Civic Alliance for Justice and Democracy and the Articulation of Social Movements and Civil Society Organizations, among others, should be part of this newly empowered political force that clears the way for the exit of Ortega and Murillo.  It must end the repression, so that the country and the families are no longer destroyed, so that the de facto state of siege and ongoing violations in the prisons are ended — so that justice is done. There is no excuse for not moving forward in unity. We are winning!