On Thursday 4 October 2018, the Blue and White National Unity (UNAB) was founded and announced its programme. 43 organisations took part in forming the unity.

Find below the manifest for UNAB.  Click here for a Spanish version

National Unity for Justice and Democracy

The Ortega Murillo dictatorship, which has led Nicaragua into a grave human rights crisis violating the Constitution and the law, maintains itself only by violence and repression through police, paramilitary and shock forces, who have subjected the people to a massacre that up to now has produced more than 400 people murdered, more than three thousand wounded, an undetermined number of people disappeared, kidnapped, captured, tortured and criminalized, and more than 347,000 jobs lost.

The diverse and plural movements, organizations, social, political and economic forces that throughout the country have led the civic and pacific resistance to this authoritarian, corrupt, nepotistic and criminal government, we make public the establishment of the Blue and White National Unity, with which we begin a new stage of organization and mobilization for the conquest of freedom, justice and democracy.

The unity of all the forces is an imperative to continue and intensify the struggle that would lead to the departure of the dictatorship and the construction of the democracy that we aspire to. This unity marks a progression in the peaceful resistance of the citizenry, enhancing our capacities for planning, coordination, organization and implementation of protest actions, denouncement, as well as clear and resounding expressions about the fact that the majority of the Nicaraguan people reject the dictatorial and repressive regime that has committed crimes against humanity, for which those responsible will be judged.

An economic disaster is being experienced as the result of the repression of the regime, the most affected sectors are commerce, hotel and services (tourism), manufacturing and construction, affecting the weakest base of the pyramid. We take on as our own the commitment to its improvement, its reactivation and to return to grow again in numbers and quality of life. Not one job less, nor the loss of another life.

The principle objective of this Blue and White Unity is building a Nicaragua with democracy, freedom, justice, institutionality and respect for human rights. To achieve it, the quick departure from power of the Ortega Murillos through democratic means is indispensable.

The Blue and White National Unity commits to promote and defend:

7. Re-establishment of university autonomy; respect for the autonomy of the Caribbean Coast and indigenous and Afro descendent communities, and the municipalities.

The history of Nicaragua has demonstrated the courage and the capacity of this people to defend their freedom. We unite under our blue and white flag to achieve the departure of the Ortega-Murillo dictatorship, and set the bases for a democratic, free and just Nicaragua for present and future generations.

This national unity will take shape in each territory of our geography, in the countryside and the cities, and is open to the diversity of actors that are taking on the principles of this Unity, are willing to contribute to the change that Nicaragua needs.

We recognize the support of the international community for the people of Nicaragua in the search for solutions to the grave social and political crisis. In particular we recognize the efforts made by the Organization of American States, the United Nations, and the European Union, and we call them to redouble their efforts for the defense of the human rights of the Nicaraguan people and the establishment of democracy, 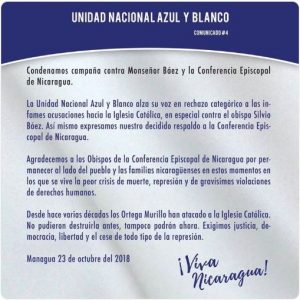 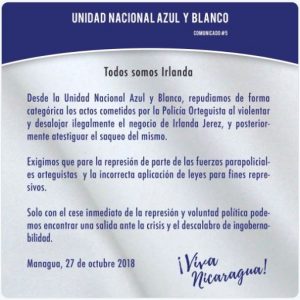 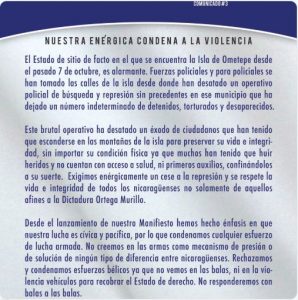 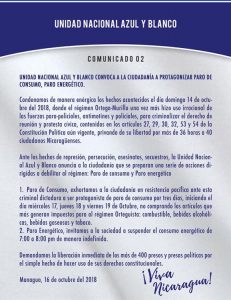