There is also something to smile about in Nicaragua. Doña Coquito of 78 years became ‘world famous’ in Nicaragua, when she was selling cold water in little plastic bags from a small stand in front of the seminar, on the second day of the national dialogue 18 May. Even though the old lady makes a living from selling water in the streets, she ended up donating her entire stock of water to the students protesting in front of the seminar. Such an act of solidarity from a less advantaged older lady did not go unnoticed in Nicaragua. Like a fairytale Doña Coquito herself ended up at the receiving end of a fundraising to upgrade her humble home. Among other things she was blessed with 2 new beds, a TV, and a kitchen with a brand new gas burner.

Since that day, Doña Coquito hasn’t missed a single demonstration. However, she is not able to run that fast from the police. Last Saturday, she was imprisoned by the anti-disturbance police, but she has been released.

Doña Coquito says that she is not that good with words and that she does not know anything about politics but her heart beats for the students and their cause. She has seen with her own eyes how they are being treated and gunned down.

However, the older lady seems to have found a way with words. These days a video has gone viral showing her putting a group of government mobs in their place. They threatened her: “Watch out! Some day, you will have to pay the bill!”. To this, Doña Coquito jauntily answered: ”To you or whoever send you, – just pass the bill to my bank – in dollars!”. That is some comeback line in dollar hungry Nicaragua. It shows a woman who will definitely manage and who knows her own value, – in hard currency.

Thursday last week, the soft spoken lady, Doña Coquito, was seated right in front at the press conference, next to Dr. Tünnermann, when the opposition presented their national unity under the title ’Unidad Nacional Azul y Blanco’. Dr. Tünnermann is a lawyer, former education minister for the Sandinistas in the 80ies, former ambassador to the US, former university principal and among the chosen few who made up the Civic Alliance who negotiated with the government during the national dialogue. Dr. Tünnermann is 85 years old and still going strong – just as mild and humble as he is smart and eloquent. There they were, Doña Coquito and Dr. Tünnermann, in the front row, both enjoying sky-high levels of legitimacy, both humble and loved by many. There is progress in Nicaragua. Doña Coquito is on the team! 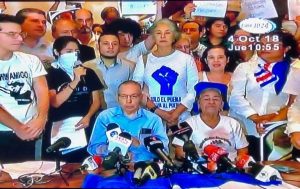