Do cry for me, Argentina: The memory of Álvaro Conrado makes it into the OAS

Do cry for me, Argentina: The memory of Álvaro Conrado makes it into the OAS

At a special meeting in the Permanent Council of the Organization of American States (OAS) 19 October, the Argentinian Ambassador to the OAS Permanent Council, Mrs. Paula María Bertol, broke away from the usual ‘lingua diplomatica’ when she honored the memory of the beloved Nicaraguan teenager, Álvaro Conrado, who was killed by government forces on 20 April. The Argentinian Ambassador used the case of Álvaro Conrado to personalize the struggles of the Nicaraguan people and make an outcry against the actions of the Nicaraguan government:

“When describing the situation in Nicaragua, we are talking about the dead, the wounded, and the disappeared as if they have no names. They have names. They have real stories. Today, I would like put a name to Álvaro Conrado, Alvarito, the son of Lizeth and Álvaro. Álvaro Conrado’s death was mourned by many in Nicaragua. He was shot in the neck by a sniper. His last words were ‘it hurts to breathe’ (me duele respirar). For many in Nicaragua it hurts to breathe. This is very serious. The government of Nicaragua is far from being the ‘Government of Reconciliation and National Unity’ that it presents itself as.”

During earlier sessions, Mrs. Bertol had already won the hearts of many Nicaraguans, most notably for her work on the OAS resolution, adopted on 18 July, in which the institution, finally, 3 months into the crisis, ‘condemned’ the violence in Nicaragua and placed responsibility on the government. Until then, the OAS was only ‘worried’ about the violence, and treated it like a sudden natural disaster – spontaneous and with no one to blame.

In a world of diplomacy that has little else to offer Nicaragua but a choice of words, the Argentinian Ambassador’s chose hers wisely. Álvaro Conrado, Alvarito, has become an iconic figure of the civic struggle for justice and democracy in the country. By mentioning Alvarito, Mrs. Bertol made a link between diplomatic circles and the streets of Nicaragua. Her words offered emotional and earnest support to the many who are suffering from the current crisis and who are finding it ‘hard to breathe’ – now a slogan used on protest banners.

Álvaro died on April 20, day 3 of the protests, 6 months ago today. He had turned 15 just 12 days before. As the first minor who died, his death was a particular shock that led to national mourning. It also sparked further rage against the Ortega government.

Álvaro was a 10th grader, who did well in school. He was a member of the athletics team at his school and had been training to run tracks at a competition the day after he died. He had won many medals already and had learned English hoping he would one day qualify for a scholarship and go study abroad. He played guitar, and loved old school rock like the Beatles and Queen, his skateboard and the world of anime (Japanese animation). People teased him about his unusual interest in anime, a world of fantasy figures where ‘humans’ have colored hair, big eyes, and probably a magic skill or two. 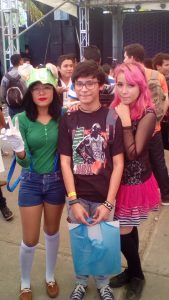 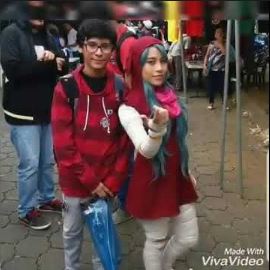 Despite being sympathetic to the public protests that broke out on 18 April, the father of Álvaro Conrado had strictly told Álvaro to stay away from the protests because of the danger and his young age. But Álvaro had a mind of his own, and the conviction of a young lad with plans to become a lawyer.

Late at night, the day before, he had sent a patriotic message to his friends to get them to join him: “Our Nicaraguan soil. The place where we were born and grew up. Our blue and white flag stained by the blood of our brothers. Where is the respect towards our fatherland? This is Nicaragua, not some trash. We are Nicaraguans. We are one. They cannot defeat this (Nicaragua united), never ever“. It is still uncertain who he went with him, if any. The saying goes that they stayed home, played Nintendo, and honoured the commands of their parents to stay home.

The pension reform of INSS (the National Institute of Social Security/Instituto Nacional de Seguridad Social) would reduce the little pocket money his grandmother receives to cover her personal needs. As many others, he had also seen on social media how the elderly protesters got beaten by government mobs in Léon on 18 April. The violence by the mobs caused an outrage, and university students soon joined to support the demands of the elderly, to protest against state violence and the corruption at INSS. On day 2, following heavy attacks by the riot police and government mobs, the students at several universities had to barricade themselves on the university premises, escaping from tear gas and heavily armed government forces waiting for them outside. That day, 3 people died. Independent media were closed down, censored by the government, but they were still able to broadcast on social media platforms.

On day 3, Friday 20 April, the University of Engineering (UNI) was a main scene of events. Álvaro Conrado went to help the students at UNI, as soon as his father had left for work. The North side of the university, facing the baseball stadium, Dennis Martinez, was the most difficult side to protect and the tear gas was taking its toll on people. Due to his athletics training, Álvaro was a fast runner. His function became to pass water, and bicarbonate to the students to treat the effects of tear gas. He bought the items himself at a nearby gas station from the money he had gotten for his 15th birthday. Just when he entered the university yard, he was shot in the throat by a sniper, who was placed in a privileged position at the stadium. His dad says that his red jacket made him an easy target. There is a 16-second video showing Alvarito just after he was shot, voicing his words ‘it hurts to breathe’ (me duele respirar).

Some students carried him to a civic medic post, and from there he was transported to the nearby public hospital, Cruz Azul. However, the Cruz Azul Hospital refused to attend to him and kept their doors closed. He was then taken to the second hospital, the private Bautista. On the way there, Álvaro told the others not to let him sleep because he was afraid he would not wake up again. He died in the operating room from a loss of blood. The doctor told Álvaro’s father that his son could have been saved had he been attended to and received blood earlier.

The mourning of Álvaro Conrado inspired many artists to create little works of art. Most widely known is probably the drawing of Alvarito made by Juan Tijerino for Álvaro’s school, the Loyola Institute, to be used for a commemoration of the 10th grader they had lost. In honour of Álvaro’s love of anime, Tijerino drew him in anime style, with big eyes, in his Loyola thirts, the national bird the guardabarranco on his shoulder, and the national flag. At the same event, journalist Leana Astorga was invited to read aloud the poem “those who didn’t ask to be heroes in april” (los que no pidieron ser heroes en april), which she wrote late at night after having interviewed the parents of Álvaro. The national poet, Carlos Mejía Godoy has written a song in his honor. Álvaro has become a symbol for the protesters. His face can be seen all over the country on posters, banners, thirts, murals, and commemoration sites alongside his words ‘it hurts to breathe’. For many, the symbol of Álvaro Conrado serves as a reminder of the importance of the protests and why they cannot give up. 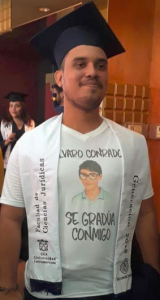 6 months after the crisis broke out, according to internationally aclaimed reports: