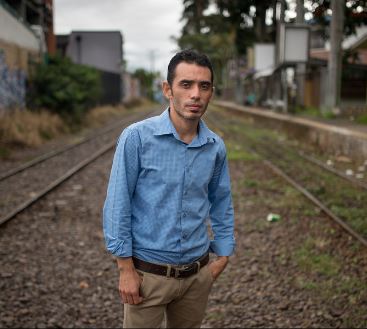 Mikel Espinoza is the former editor of the Ortega government media 19 digital. He talks from his exile in Costa Rica: “Murillo’s order was not to inform”.

Rosario Murillo, the vice president and the only government spokesperson, ordered him not to tell the truth about the repression that left 325 dead.’

HAVANA TIMES – Since the civic protests against the government of Daniel Ortega and Rosario Murillo began in April, official media outlets have disqualified the demonstrations as an “attempted coup d’état by the right,” and that is no coincidence. “Anyone who opposes the Sandinista Front or Daniel Ortega, is (categorized) as a rightist,” assures the former editor of the official outlet 19 Digital, Mikel Espinoza, now exiled in Costa Rica, in an interview with journalist Carlos Salinas, for the program “Esta Noche.” (Tonight).

Espinoza says that in the government media there are guidelines that do not allow them to discuss, inside the newsroom, the journalistic coverage of the crisis in Nicaragua.

The “compañera” (comrade), as they are told to call Murillo, is the person in charge of the “communication council” of official media outlets. She ordered that the main objective of the media was “not to inform” about what was happening in the country. “The only thing that was to be reported was press statements from the National Police and whatever the “compañera” said, everything official,” expressed Espinoza.

The journalist added that reporters from that media were not going to cover the first protests and were guided by what the Communicators’ Network, aligned to the governing FSLN, sent them. “We were not going to the protests, the Communicators’ Network was there to pass photos, videos, but the journalists were not there,” he said. However, he says that starting April 20th, two days after the social outbreak, they began to provide coverage.

Espinoza is now exile in Costa Rica. After presenting his letter of resignation, he left Nicaragua because he wanted to “detoxify.” I felt out of breath, I wanted to detoxify. Living in Nicaragua is frightening, especially for someone like me who worked for the Sandinista Front,” he commented.

What finally made him resign

For Mikel, the burning of a house in the Carlos Marx neighborhood, where six members of a family (including two children) died on June 16th, was grotesque. “The crying of those children when they were burning and the manipulation by the government,” were the trigger for the journalist to make the decision to leave the newsroom of this pro-government media.

At that time, he drafted his resignation letter regardless of whether he was paid. “I didn’t care if they did not pay my severance payment, I didn’t care, I could no longer stand it,” he said.

Mikel had already witnessed the May 30th Mother’s Day massacre, which left more than a dozen dead, one wounded with “brain death” and dozens hospitalized. “I had seen so many people die, so many children, so many things that I did not agree with,” he stated.

The ex-editor of the ruling party media adds that he did not want to have problems with his co-workers, nor with the Sandinista Front. “I saw the reaction in my colleagues when other colleagues resigned, and I did not want to be exposed to that,” he explained.

The journalist added that he has never fired a weapon and that while he was editor of 19 Digital never did anything for which he could be reproached. “I never did things for which I could be reproached, I even softened many of the attacks, but all that was accumulating until I said I am leaving, I couldn’t stand it anymore,” he said.

Espinoza said that as a journalist he felt a “tremendous blow” when he saw that the official media policy was to omit information. He confessed that there were attacks in which the police participated, and supporters of the government, and they as official media had to say that it was the “right.” “Even though there were images and witnesses who said that the attacks were done by police, we had to say that it was done by the right.”

Espinoza stated that he had a political conviction with the Ortega regime and believed that he could do journalism in a media like 19 Digital. “I felt quite comfortable, I agreed with many things that the Front did,” he confessed.

They finished killing it, they were killing it little by little, but beginning on April 18th, they killed the Sandinista Front,” he emphasized.

Espinoza maintains that journalism is his life and that he wants to continue practicing the profession, which he continues to do from a personal blog. Now, from Costa Rica, he follows every day what happens in Nicaragua. “I have not disconnected myself at all from what is happening in Nicaragua,” he added.

Link to the original article in Spanish here:

A video interview with Espinoza here: