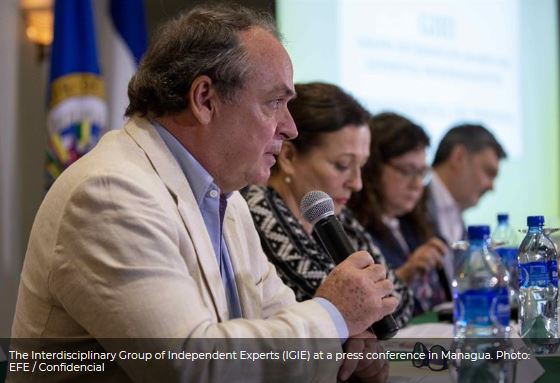 Faced with the lack of transparency and independence in the Nicaraguan justice system, the Interdisciplinary Group of Independent Experts (IGIE) urged Daniel Ortega’s government to establish a Special Prosecutor’s office. Such an office would be charged with investigating the acts of violence that have occurred since last April, leaving at least 325 dead and more than 3,000 wounded. Although the government has offered no signs of cooperation with the group, the proposal was backed on Twitter by the Secretary General of the Organization of American States, Luis Almagro.

“Given the absence of guarantees for independent and objective action by the [Nicaraguan] penal system, the IGIE considers it urgent that the state establish a Special Prosecutor to investigate the acts of violence,” indicated Amerigo Incalcaterra, a member of the group, during a press conference in Managua.

Hours after that conference, the OAS secretary general tweeted: “Secretary General@OEA_oficial has closely examined the report of the IGIE in Nicaragua and asks the Nicaraguan government to accept their recommendation for the creation of a Special Prosecution to investigate the systematic and repeated violations of human rights denounced by the Group of Experts.”

The Interdisciplinary Group of Independent Experts further emphasized the need for a Special Prosecutor given the distrust of the victims and their families towards the authorities charged with investigating and bringing to justice those responsible for the grave acts of violence. This distrust “is evidence of the lack of transparency, independence and autonomy of the institutions charged with reestablishing justice.”

According to the experts, “many families haven’t even filed complaints because they distrust the judicial system. Other families that have opted to approach the Attorney General’s office haven’t received a response in accordance with their status as victims. In many cases, they’ve indicated to those making the denunciation that they should be the ones to bring proof.”

Incalcaterra explained that the Special Prosecution could be created via a new law, or simply justify its creation under Article 19 of the Organic Law of the Attorney General’s Office, as a means for “guaranteeing the independence of the prosecutors in the investigation and exercise of penal action.”

Law already contemplates such an office

“Special Prosecutors will be contracted for specific cases when it becomes necessary to guarantee the independence of the Prosecution in the investigation and exercise of penal action. They will have the same faculties and duties as the Departmental Prosecutors and those of the Autonomous Regions, and will act with absolute independence in the case assigned to them. In the exercise of their function, they will be subject only to that established in the Constitution of the Republic and the laws,” reads the aforementioned Article 19.

Incalcaterra noted that the new body should be integrated by “district attorneys that have been duly selected and that enjoy unquestioned prestige and the consensus of a many sectors of Nicaraguan civil society.”

Foreigners could also form part of the Special Prosecution

Pablo Parenti, a member of the IGIE, commented that there’s no set proposal for a Special Prosecution: it could be made up entirely of Nicaraguan professionals or it could be a mixed group – half Nicaraguans and half foreigners.

“The relevant question is whether the Public Ministry (Ministerio Publico) is interested in realizing judicial procedures in accordance with international standards.  It would seem not. This is the sense that we have, and I believe it’s also the general perception of Nicaraguan society. We have an obligation to speak up about it,” said Parenti.

Incalcaterra emphasized that the IGIE’s technical assistance in facilitating said Special Prosecution is at the disposal of the government.

Government continues to hinder the work

The IGIE was established in Nicaragua on July 2nd following an agreement between the Inter-American Commission for Human Rights, the Organization of American States, and the Ortega government. The group’s mission is to investigate the deaths between April 18 and May 30 that resulted from the protests.  At that point, the experts had already counted 127 deaths, a figure that would later more than double.

The experts also complained that “the IGIE has advanced in the implementation of their mission without any support from the Nicaraguan state, which has failed to facilitate official information to the different instances, and beyond that have hindered and prohibited their access to public institutions, despite the accord signed by all parties. They have also failed to respond to the Interdisciplinary Group’s request that they facilitate access to interviews with the family members of police who were killed or directly with those police who were wounded.”

“To date, the Nicaraguan state hasn’t given us a copy of any of the files. The information that we do have comes through open sources: from family members or other people linked to the cases,” affirmed Claudia Paz, a member of the group.

The experts have examined “a large number of documents, videos, photos, articles from reporters, media material and material from the social networks,” according to the IGIE press communiqué. “The information was collected by the IGIE in Nicaragua, Costa Rica, Honduras, U. S., Mexico and Spain.”

Incalcaterra indicated that during the four months that the group has been working, its work has been “complex and difficult.” “The methodology of the IGIE’s work had to be adjusted due to the lack of cooperation on the part of the Nicaraguan state. The IGIE has received neither collaboration nor any assistance from the Nicaraguan authorities in implementing the cooperation that a closely coordinated labor implied with them, especially with the Attorney General’s office,” he complained.

Integral Plan for Reparations to Victims

The experts indicated that they will present to the regime an Integral Plan for Reparations, even though the State has not responded to the invitation, and missed the meetings to “analyze the response and the extent of the State’s responsibility in this situation, and to elaborate an integral plan for reparations.”

Sofia Macher, another expert from the group, explained that the plan has been “validated and consulted during more than 20 meetings with different associations, both with victims and with civil society in general.”

She added that there can’t be any restitution unless it occurs “with truth, with criminal justice and with guarantees that it won’t happen again. It’s part of a more integral process. In no way is it acceptable to offer reparations in exchange for impunity.”

The IGIE deeply regrets the suffering of the victims and their families and understands that this suffering has been aggravated by the government’s refusal to recognize their status as victims and their stigmatizing. At the same time, it expresses its concern for the denunciations of many of those consulted that the government offered them compensation in exchange for the families of the victims agreeing not to file a formal complaint with the justice system,” reads the press statement.

The reparations plan would include seven different possibilities: “symbolic, economic, educational, work, health, legal regulation or the return of the displaced,” stated Macher.