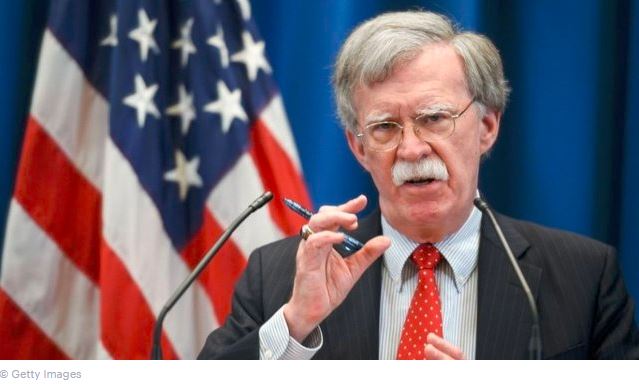 Bolton dubs Cuba, Venezuela and Nicaragua ‘the troika of tyranny’

The Trump administration is doubling down on its policy to isolate Cuba, Venezuela and Nicaragua, with national security adviser John Bolton dubbing the three countries the “Troika of Tyranny” on Thursday.

“In Cuba, Venezuela, and Nicaragua, we see the perils of poisonous ideologies left unchecked, and the dangers of domination and suppression,” said Bolton in a Western Hemisphere policy speech at Miami Dade College’s National Historic Landmark Freedom Tower.

“The Troika of Tyranny in this Hemisphere — Cuba, Venezuela, and Nicaragua — has finally met its match,” he added.

The administration’s top goal in pairing Cuba and Venezuela is to build awareness of the communist island’s role in propping up Venezuelan President Nicolás Maduro’s government.

Bolton’s priority is “to really unmask and tell the untold story about the very real and factual story of Cuban involvement in Venezuela,” said another senior official.

Nicaragua will remain a target for U.S. sanctions until it holds free and fair elections, said Bolton.

“Until then, the Nicaraguan regime, like Venezuela and Cuba, will feel the full weight of America’s robust sanctions,” he added.

But the brunt of Thursday’s actions was aimed at Cuba, blamed by the administration’s top Western Hemisphere experts for the region’s democratic regressions.

Building on a presidential memorandum released last year that slapped sanctions on entities connected to Cuban military intelligence, Bolton said “over two dozen additional entities owned or controlled by the Cuban military and intelligence services to the restricted list of entities with which financial transactions by U.S. persons are prohibited.”

The moves represent a sharp departure from the Obama administration’s policy of rapprochement with Cuba. President Obama restored diplomatic relations with the island in 2015; they’d been severed since 1961.

The Trump administration stopped short of closing the U.S. Embassy in Havana, but Bolton presented a harsh, if veiled, criticism of the Obama approach.

“Members of this administration will never take a picture in front of Che Guevara, plastered over the Cuban ministry that runs the National Revolutionary Police,” said Bolton.

“As you know, this organization is responsible for oppressing dissidents and suppressing every kind of freedom known to man.

“We will not glamorize Marxist guerillas to promote a delusion of our own glory.

“Our concern is with sanctions, not selfies,” he added, in reference to Obama’s 2016 visit to Cuba.

But the U.S. Embassy in Havana will remained staffed by a skeleton crew, following the so-called sonic attacks that caused mysterious illnesses and permanent brain damage to some U.S. and Canadian diplomats on the island.

The Cuban government has denied any involvement in the attacks.

“This president will not allow our diplomats to be targeted with impunity. And we will not excuse those who harm our highest representatives abroad by falsely invoking videos, or concocting some other absurd pretext for their suffering,” Bolton said.

The aggressive stance against the “Troika of Tyranny” follows the administration’s reorganization of Western Hemisphere policy under Bolton and Secretary of State Mike Pompeo.

In October, the Senate approved the nomination of Kimberly Breier as assistant secretary of State for Western Hemisphere affairs, filling a top regional diplomatic position that had remained vacant since 2016, when Roberta Jacobson was appointed ambassador to Mexico by Obama.

In an interview in October with The Hill, Otto Juan Reich, who held the assistant secretary position under President George W. Bush, said, “The Trump policy toward Latin America is about three months old.”

“We’re sort of where we should’ve been in February of 2017, so this is the beginning of the Trump admin policy toward Latin America,” Reich added.

Bolton closed his speech to loud applause, after comparing the leaders of Cuba, Venezuela and Nicaragua to The Three Stooges.

“These tyrants fancy themselves strongmen and revolutionaries, icons and luminaries. In reality, they are clownish, pitiful figures more akin to Larry, Curly, and Moe. The three stooges of socialism are true believers, but they worship a false god,” said Bolton.

“The United States looks forward to watching each corner of the triangle fall: in Havana, in Caracas, in Managua,” he added.

Link to the article here