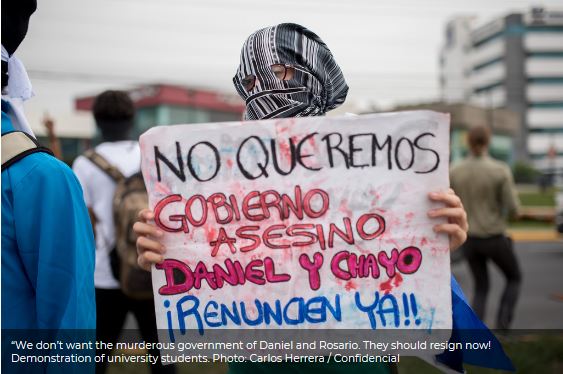 The Resignation of Ortega-Murillo and the Transition

Ortega commands, but no longer governs the country; neither does he represent a viable option to negotiate a political.

The state of emergency imposed by Commander Daniel Ortega, severely undermining the constitutional right to free mobilization and the right to petition, represents the final period of the political exhaustion of the Ortega-Murillo regime.

This Friday, the “Supreme” ruler deployed several hundred heavily armed riot police, establishing a police cordon between the Masaya Highway, Teresian School, Plaza del Sol, 100% Noticias and other points of Managua, Matagalpa and other cities, while decreeing the prohibition of the Blue and White marches “now and forever.”

If his objective was to exhibit the power of the regime to prevent the self-convoked people from continuing demonstrations in the streets in a civic way, what he ended up showing was the extreme weakness of a caudillo who still gives orders and commands his supporters, but no longer governs the country, nor can he govern citizens in a democracy.

Since the first days of the slaughter in April, President Ortega and his wife, the Vice President Rosario Murillo, were stripped of all political legitimacy. To their already questionable status, was added the total loss of legitimacy to exercise their office. Their biggest failure, even worse than the corruption and squandering of more than four billion dollars of the Venezuelan cooperation, have been the deaths of more than 325 citizens as a result of police and paramilitary violence perpetrated by the State.

In the eyes of a broad national spectrum—including voters and abstentionists, independents and Sandinistas—Ortega and Murillo were already politically and morally incapable of continuing to govern. But influential sectors of the country and the international community, argued that to avoid a power vacuum, it was necessary for Ortega to continue leading the presidency and steering the negotiation of electoral reforms, to achieve a constitutional transition. His exit from power, they advocated, should occur after the outcome of early elections.

However, that premise, always debatable, ceased to have any validity, as it was demonstrated that Ortega never had an intention to negotiate the transition, as he clung to the repressive escalation to try to crush the demands of the civic rebellion. The result has been total misrule in recent months.

The bloody “Clean-up Operation,” the arrest of more than 600 political prisoners, the criminalization of the civic protest, and now the prohibition of the right to peaceful mobilization, show that Ortega cannot govern without repression, and only remains in power by the brutal force of the dictatorship, after having annulled the country’s Constitution.

Far from representing a guarantee of stability and normalization, this new coup d’état symbolizes the greatest threat to the national and international stability of the country. By imposing a pattern of denial and impunity on the massacre, Ortega has liquidated any possibility of coexistence and national understanding; by eliminating the foundations of national trust, he has caused the worst economic crisis in the last 40 years; and by pushing us toward total isolation and international condemnation, he has exposed the country to imminent political and economic sanctions, which could accelerate the economic crisis in the coming months.

In short, the mandate of his presidency is exhausted; he no longer governs, and his time as a viable interlocutor to negotiate the political transition has also run out. Now, the only possible peaceful and constitutional way out, passes through the resignation of Ortega and Murillo as soon as possible, so that the National Assembly could elect a new president from within, a legislator without any responsibility with the massacre and the corruption. A transitional constitutional president, chosen even among the elected deputies of the government party, who will be responsible for negotiating the terms of the electoral reform and early elections, providing political guarantees for all, as well as the foundation for a new policy of truth and justice, without impunity.

That is the path, without Ortega and Murillo in power, which can return political and economic stability to the country and avoid the fatal outcome of the precipice. The Sandinista Front Party and the state institutions that have a decisive political influence on the regime, such as the Nicaraguan Army and the Supreme Court, face the dilemma of sinking with Ortega or facilitating his resignation and ensuring a constitutional transition.

The alternative is to bet on inertia and stick to the unpredictable consequences of more repression and economic chaos. Private actors, in particular big business people, also face a similar dilemma, between inaction and exerting greater economic pressure to favor democratic change. Tomorrow it may be too late for everyone.

Meanwhile, the self-convoked movement will continue to defy the regime in the streets, with or without official bans, until the right to democracy and justice without impunity is fully restored.

Video on the same here