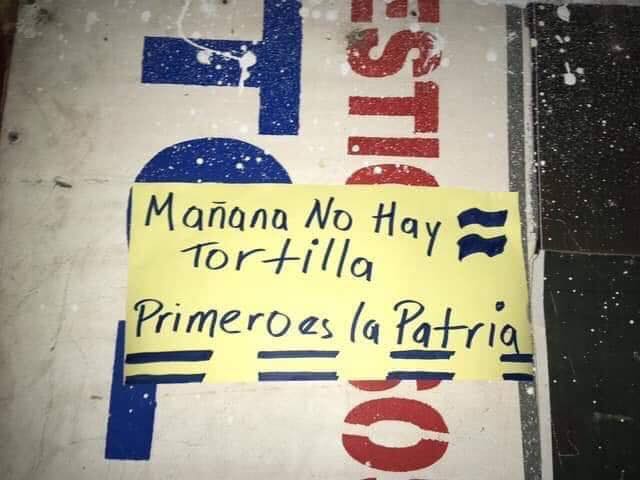 “Tomorrow, there are no tortillas. The fatherland comes first”, it says on the photo.

The national strike in Nicaragua is on today and until midnight. It is an important achievement, and the assassination of the 56-year-old political prisoner Eddy Montes in a prison last week is among the triggers. The support to the national strike from businesses, schools and citizens is extensive. People are staying in their homes behind closed (and locked) doors, keeping their shutters closed.

“We would fill the streets with protesters, if the regime would allow us our right to do so. Now, our absence will be our protest”, said the 80-something-year-old former university rector Tünnermann at the opposition’s press conference. A spontaneous round of applause briefly interrupted the press conference, and shouts from the audience honoring the legacy of Eddy Montes followed suit.

For 9 months, no national strike has been used as a means of exerting pressure on the regime. Before that, there were 3 individual days of strike but the opposition turned out divided on the subject: “Who is going to pay for the strike?”, asked the commercial sector. “We paid in human lives!”, answered the students. “And what does the elite have to offer?”, asked large parts of civil society in return.

It did not help the conversation in the opposition that Ortega threatened to send his police out to open the shops by force if there were ever a national strike again. “They are playing with fire”, he said in a speech in September. It was his first public threat against the elite in the business sector, which used to be his partner in sham democracy.

At the same time, demonstrations were criminalized, and the headhunt on protesters started (imprisonments). Ortega fanatics have since been able to walk around in a doze of imagined normality and the frustration among the civil movement has been on the rise.

Now, the opposition stands united again. Together, they will close down the country for a day, and protest through their absence. They will pressure Ortega to live up to the agreement he has made, to release all political prisoners. The deadline is midnight 18 June.

It is great to see a united opposition again! All civic means should be used when engaged in a preaceful fight for democracy. The rusty weapons will remain buried in the backyard. But there are no tortillas today!